As part of BWML’s regeneration programme of Marinas we were tasked with undertaking a site rewire while they were undertaking a replacement of the worn and torn existing pontoons. The difficulty came with orchestrating the existing residents with somewhere to moor up whilst the works were being undertaken. We worked very closely with the Marina, the residents and the pontoon manufacturer to ensure minimal disruption. 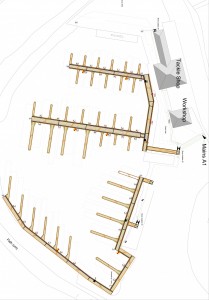 Firstly we upgraded the main incoming supply from the local district network operator as the supplies to each hook up were being increased from 10 amps to 16 amps. This again was coordinated between the DNO, GRP cabinet manufacturer, the meter operator and again site to ensure power loss was at a minimum.

The main contract was to undertake the works in 2 halves. We had to run temporary supplies to one half of the marina, so while the other half was being renovated there was a place for the residents to moor up and still have power for their daily routines. Working very closely with all involved we were right behind the pontoon manufacturers installing electrical distribution, cabling and pedestals to ensure minimal downtime for the residents. Once the first half was up and running the boats were then relocated to the completed half and moored closely to give us the space to carry on with the removal of the previous half of the marina. We quickly completed this part of the works and subsequently the job went very smoothly with praise given from the residents and client.

Other design constraints were the 1 in 100 year flood levels which we had to ensure our switchgear and accessible electrical equipment like card meters and sockets were not to be affected in the most serious of floods. So we engineered units which at each gradient would have their equipment at such a height which would not get damaged from the water levels. Having our own factory to enable us to produce bespoke units and pedestals we were able to achieve this relatively easily.

Whilst we were mainly contracted to undertake the installation for the marinas pontoons we soon noticed the building supplies had been added onto over the years and there were real benefits to be made by reorganising these circuits. We undertook a survey and made our recommendations for a more efficient system to the buildings. This included better balancing over the 3 phases and load control for each circuit. Which has now resulted in fewer faults and isolated occurrences rather than affecting the site as a whole. This is another service Maricer can offer for the site owner who is experiencing nuisance tripping issues. 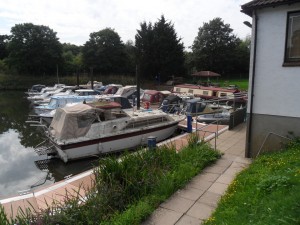 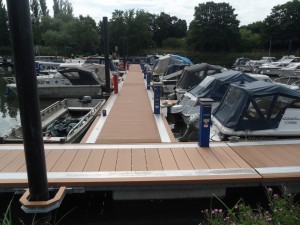 Over looking the main pontoon 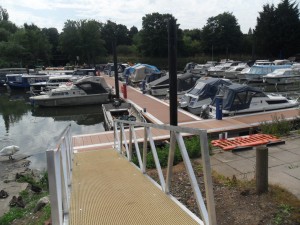 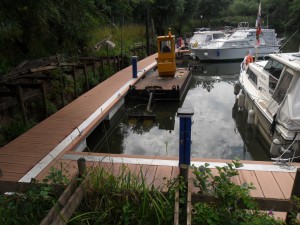 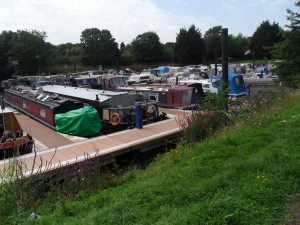 View from the bank