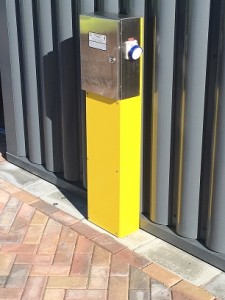 Maricer is delighted to announce that it has designed, produced, and installed two types of bespoke service pedestals for the RNLI’s new prestigious purpose built All-weather Lifeboat Centre, at their headquarters in Poole, Dorset.

The bespoke service pedestals incorporated multi voltage outlets (110v, 230v, 400) which were finished in Rapeseed yellow. Maricer UK and International General Manager Nigel Draper commented “working with a prestigious, worldwide recognised body such as the RNLI, yet again reinforces our position in the market place as not only an International leader, but also in the UK too”, he continued, ” the very nature of the specification appeared at first to be quite demanding, however our design team came up with the perfect solution in no time at all”.

The units had to incorporate a 230v -110v transformer, which due to the amperage of the outlets specified, meant the physical size of the transformer was quite large, and heavy. Our design team made some alterations and modifications to the Europa’s chassis taking into account the relevant switchgear and other components in order to accommodate the transformer.

The unique “maintenance” service pedestal, with the transformer being housed remotely from the unit in its own bespoke enclosure, was a little easier to design, being designed from scratch.

Maricer Director Ted Waring comments ” we are extremely pleased with the feedback we’ve received from the RNLI, which just goes to show that Maricers’ reputation for producing quality products and services is being recognised not only here in the UK but also on the global stage”. He continued, “We are finding more and more prestigious organisations such as the RNLI are turning to Maricer, to provide them with bespoke products to meet their exacting requirements and budgets.

Everyone at Maricer has been working hard over the last few months in raising the awareness of Maricer and it’s products to a much wider audience than ever before, so much so, that we are now able to boast a number of “blue chip” organisations such as the RNLI forming part of our clientele”.